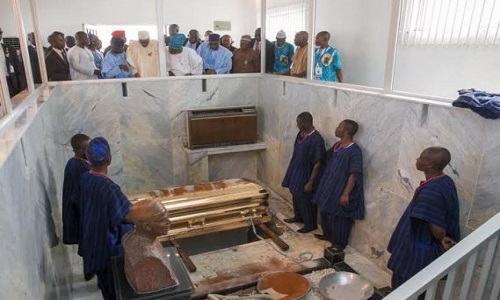 The remains of Hannah Idowu Dideolu Awolowo, wife of the late sage, Obafemi Awolowo, were on Wednesday finally laid to rest beside her husband’s, at the family compound in Ikenne, Ogun State.

The burial of Mrs. Awolowo, who died at the age of 99, followed a church service held at Our Saviour’s Anglican Church, which had in attendance 35 Bishops, and many other clerics.

Also in attendance were senior government and public figures in Nigeria, prominent among them, President Muhammadu Buhari.

Earlier in the day, the children of the deceased planted a tree in the family compound in memory of their mother, to signify the date she was buried.

Ikenne town was agog as residents lined up the streets to pay their last respects to the woman popularly known as HID Awolowo as her body was taken to and from the church.