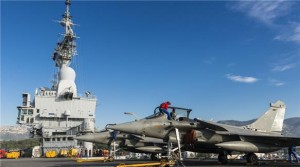 France’s president has said his country will step up its fight against the Islamic State of Iraq and the Levant (ISIL) group, launching a week of diplomacy with a meeting with the British prime minister in Paris. Francois Hollande and David Cameron held a joint press conference in the French capital on Monday, a day after French police appealed for help in identifying one of the men involved in the Paris attacks.

In a Twitter post on Sunday evening, the police said the man was the third participant in the attack, which occurred in the national stadium, Stade de France, where the French football team was playing Germany and with Hollande present. The attack was one of several carried out across Paris on November 13 by suspected ISIL members, and left 130 people dead.

At least one of those involved in the attacks, Belgian national Salah Abdesalam, is believed to be on the run and hiding near or around Belgium’s capital, Brussels.

Police in Belgium arrested 16 people in overnight raids across the capital Brussels as the hunt continued on Sunday for a key suspect in the Paris attacks. The search to find Abdesalam and find out who his accomplices are comes as France deploys its military assets to take on ISIL.