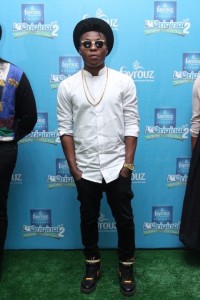 Fast rising Mavin Records star, Reekado Banks has opened up that he almost quit music shortly before Don Jazzy picked him up via Twitter.

In an interview with Punch he also admitted that one of his biggest dreams in life was to own a house with clean toilets.

“Two years ago, I wanted to quit music. I did not know I would be famous. At that point in my life, I was fed up because everything was not working right for me and it was very tiring. I felt like I was wasting my time doing music and it seemed that everything was working against me. I was very frustrated at the period and it was a very difficult time for me. I was in school and I had it on mind to face my studies squarely and hopefully, get a job later in life. When I was about to give up, I told myself to give music one more chance and God performed a miracle. It is God’s grace that helped me forge ahead.

Don Jazzy sent out a message on the Internet that people should send a demo of their songs to him. Luckily for me, my brother sent mine to him. Ironically, my brother did not tell me because at the time, we were not on talking terms but he still did that for me regardless. To cut the long story short my song was picked out of 5,000 entries,”

Revealing what his biggest dream was

“One of my biggest dreams in life was to own a house that I could eat in the toilet because at some point in my life, I lived in a house that they used pit latrine. I think I am at this point in my life because of the grace of God and my hard work. I am not the most talented person but it is God’s grace that has kept me going and brought me to the place that I am right now. I believe it is this same grace of God that would take me to where I want to be,”