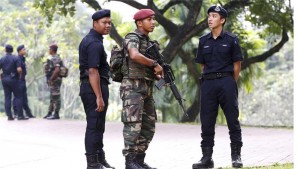 Kuala Lumpur, Malaysia – Malaysia deployed soldiers in its main city on Friday after unconfirmed reports of an “imminent terrorist threat” ahead of a gathering of world leaders for a regional summit, including US President Barack Obama. At least 2,000 army personnel were stationed at strategic points in Kuala Lumpur and another 2,500 were on standby.

“There have been reports of imminent terrorist threats in Malaysia,” police chief Khalid Abu Bakar said in a statement on Thursday night. “At this point, I would like to underline that they have yet to be confirmed.”  The raised alert level comes after Bakar confirmed the existence of an internal police memo detailing the presence of at least 10 potential suicide bombers in Kuala Lumpur and eight elsewhere in the country.

The police memo, leaked to local media, revealed details of a meeting last Sunday between members of the armed Philippine groups the Moro National Liberation Front and Abu Sayyaf, along with those from the Islamic State of Iraq and the Levant (ISIL). An agreement at the meeting was made to deploy Abu Sayyaf and ISIL fighters to Kuala Lumpur and to Sabah, Malaysia’s eastern-most state, the memo said.