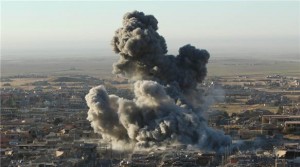 Kurdish Iraqi fighters, backed by US-led coalition warplanes, have launched a major offensive to retake the strategic town of Sinjar in northern Iraq from Islamic State of Iraq and the Levant (ISIL) fighters. Aljazeera has more:

A statement from the Kurdish Regional Security Council on Thursday said about 7,500 Peshmerga fighters were closing in on the mountain town from three fronts in an effort to cut off ISIL supply lines. Al Jazeera’s Imran Khan, reporting from the city of Erbil, said US-led coalition warplanes bombed ISIL positions in the region on Wednesday evening, ahead of what Kurdish officials called “Operation Free Sinjar”.

“What we are hearing is that a number of air strikes have taken place before the offensive began on the ground in the early hours of Thursday. Kurdish Peshmerga troops and Yazidi militias have moved towards the central area under ISIL control,” Khan said. “They say this will be the definitive operation to take the mountain, which is likely to take at least a few weeks. We have seen the Kurdish Peshmerga try this before, but they were pushed back by ISIL for a variety of reasons. But with the coalition getting involved with air strikes, this may well be the final push.”

The KRSC said up to 600 ISIL fighters were believed to be in Sinjar, adding that ISIL had recently sent in reinforcements, including foreign fighters, in anticipation of the offensive. On the west front, Peshmerga forces secured Gabara village and a stretch of Highway 47 between Sinjar and Syria, cutting off a major supply route for ISIL between Mosul and Raqqa.