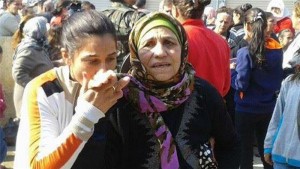 Aljazeera – The Islamic State of Iraq and the Levant (ISIL) group has released 37 Assyrian Christians from the towns of Tal Shiram and Tal Jazira, according to a monitoring group. The Assyrian Human Rights Network, which has been monitoring the negotiations since the 215 civilians were abducted by ISIL in February, said on Saturday that 37 Assyrians have been released and are in good health and shape.

The abductions were reported after ISIL fighters seized two Assyrian villages from Kurdish forces along the Khabur River in the province of Hasakah in February 2015. “Most of the Assyrians released are of old age. They have arrived to Tal Tamer on a bus and were welcomed by the priest of the Saints Church in Tal Tamer in Hasakah province,” the Assyrian Human Rights Network said in its report. “At least 215 civilians were abducted by ISIL on February 23, 2015. So far 88 have been released and negotiations are ongoing to release the rest.”

During ISIL’s offensive to seize territory in Syria, hundreds of people from different religious sects have been abducted or killed. Last September, Rami Abdel Rahman, the head of the UK-based Syrian Observatory for Human Rights, reported that the group were released after a payment was made. Abdel Rahman also said that an agreement was reached which allows Christians to stay in their own areas but under strict Islamic laws. The deal states the Christians cannot wear symbols of their religion, such as crosses, and must pay a tax.