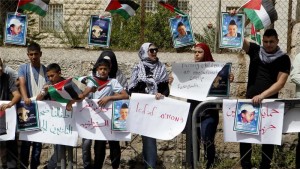 An Israeli court has found two Israelis guilty in the murder case of a 16-year-old Palestinian who was abducted, beaten and burned alive last year. Mohammed Abu Khdeir was abducted outside his home in Shuafat in East Jerusalem and driven to a forest, where he was burned alive on July 2, 2014.

The main suspect in the case was found responsible by the district court on Monday but his verdict was delayed after his lawyers submitted an insanity plea. The court is expected to consider the plea on December 20. Abu Khdeir’s killing led to the worst riots in Jerusalem in a decade, spreading to Palestinian cities in Israel and the West Bank.

Nightly clashes between Palestinian residents and Israeli police continued for weeks.  Just days after the murder, the war on Gaza began. It caused the deaths of more than 2,100 Palestinians, mostly civilians, while Israel counted 73 dead on its side, mostly soldiers.

The three suspects, a 31-year-old Ultra-Orthdox man and two minors, were arrested a few days later and confessed to Israel’s Shin Bet security services, saying they killed Abu Khdeir in retaliation for the murder of three teenage settlers in the occupied West Bank.