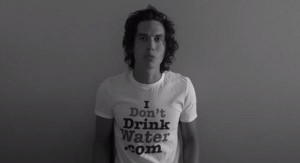 We all know we need to drink water to survive, but one man claims he drank his last sip of water, or any kind of liquids for that matter, over three years ago. And, yes, he’s till very much alive. Scoop has more:

Peter Filak, a former registered nurse and current webcam model, says he had his last sip of water on May 5th, 2012. He has had a few slips in the early days of his liquid-free lifestyle – some sodas and chocolate milks – but after managing to control his urges, he has relied solely on fruits and vegetables for his nutrition and hydration needs. “Especially as I went into a raw fruit and vegetable diet, I’d be waking up two to three times a night to pee. So it just didn’t make sense to me. I didn’t understand why I had to be drinking all that water,” Filak wrote on his website, More Apples a Day.

The 26-year-old simply doesn’t believe in hydration anymore, claiming that chemicals like chlorine and fluoride – which are commonly used to purify drinking water – are just too much for his body. “Even when you’re filtering water, you’re taking out one chemical and putting in another …[especially] the filtered water where chlorine and fluoride and all those other happy things are added to it,” he explains.

The radical change didn’t just come to him, one day. he told VICE that he began this “process of self-education” at a very young age. In third grade, he had already decided he didn’t want to consume alcohol or do drugs and he later became a vegan, which didn’t sit too well with his parents, at first. “The general consensus was that I was being a moron,” he said. “I’ve always had revelations with my parents. When I told them I was a vegan, my mom was crying, my dad was upset, they said I was OCD, and that there was something seriously wrong with me.” Now, however, both his parents are vegans, although they do consume liquids.

If you’re wondering about Peter Filak’s ultimate reason for going water-free, it’s because he wants to live to reach 150 years old. It’s a bold dream that has been brewing in him for a long time, and he seems pretty confident his bizarre diet will help him fulfill it. He currently survives on 800 to 1,000 calories per day, made up solely of fruits and vegetables. There are secondary benefits as well, he says, one being that he doesn’t spend any time in the kitchen, but also that he allegedly doesn’t sweat or produce any bad odors.

Although he does preach his unconventional lifestyle on his blog, Filak says he doesn’t push anyone to adopt it, or even buy his way of thinking. “I always tell people, ‘see for yourself.’ I was very cynical for a while, calling everyone a moron. I embraced what made sense and what was obvious to me. I’ve come to understand i can’t force my perspective on others. I’d rather people educate themselves,” he said.