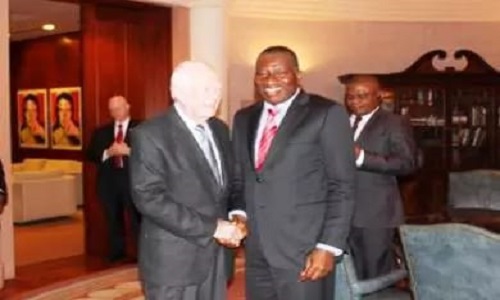 The 39th President of the United States of America, Mr. Jimmy Carter, has described Nigeria’s former President, Dr. Goodluck Ebele Jonathan, as a symbol of democracy on the African continent.

Carter stated this when he received Jonathan yesterday at the Jimmy Carter Presidential Library and Museum located at the Carter Centre in Atlanta.

In a statement, the two former presidents held a fruitful meeting at the carter Centre where they held wide-ranging discussion on global issues and shared views on how to promote peace, democracy and good governance in Africa and the world.

Speaking on Jonathan’s time in office, Carter said: “President Jonathan is the symbol of democracy in action. You set an example that other African leaders should follow”.

The former American president further praised Jonathan for organising a transparent election and easily conceded defeat by handing over to the opposition, stressing that by doing so, the former Nigerian leader showed his deep democratic commitment.

In his remarks, the former Nigerian president said his actions while in office were informed by his belief in a peaceful, transparent and people-oriented governance, adding that Africa can only move forward through democracy and good governance.

Jonathan also commended Carter for the exemplary manner he led in his post-presidential life, adding that he was inspired by the latter’s commitment to causes which advance the path of humanity.

The statement said the ex-presidents shared a common experience as one term leaders of their respective countries and have both retired involuntarily from politics while rededicating their lives towards making the world a better place.