Julius Agwu Donates $35,000 To Alariwo For His Scrotum Surgery 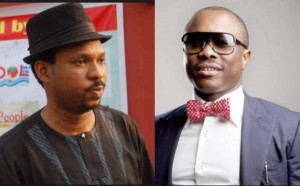 Alariwo recently admitted that he’s ill after he granted an interview to Punch revealing that he has been diagnosed with a disease known as Varicocele, an enlargement of veins inside the scrotum.

To undergo a surgery to take care of the ailment, the Crossover singer needs $130,000 for surgery abroad, an amount he’s been trying to raise.

Part of that money has been paid, courtesy of a donation from Nigerian comedian, Julius Agwu who recently survived a brain surgery in America.

“Julius is the only entertainer that has volunteered to donate the sum of $35,000 to my cause. I was shocked when he called to say he would give me the money. Now what I should be looking for is the balance. I want to thank him for this wonderful gesture”Alariwo said.

He continued “A lot of people were kind enough to provide support during the crisis. I am talking about people like Ayo Animashaun, Otunba Sesan Rufai and many others.”

Alariwo however still needs to raise some funds for his planned medical trip abroad to complete the total of $130,000 for his own treatment and also balance up what is left of his wife’s bills, who has also been ill with acute pulmonary embolism.

Share
Facebook
Twitter
WhatsApp
Previous articleMC Galaxy Dashes Fan N200,000 To Continue His Education [Photo]
Next articleSEE What Ini Edo And Flavour Are Doing In This Photo
- Advertisement -Ad ==> Discover how a young Nigerian graduate now makes a consistent 40k per week doing a legitimate online business. You too can start yours now, click here!!!