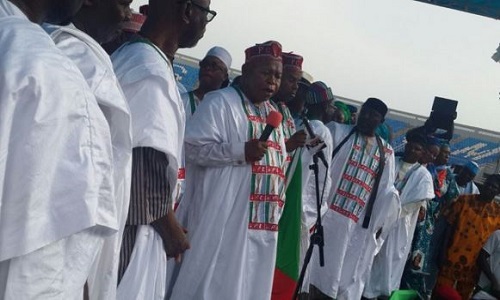 President Muhammadu Buhari has declared his support for the candidacy of Prince Abubakar Audu, the All Progressives Congress (APC) standard-bearer in the November 21 governorship election.

The president, in a statement by his Senior Special Assistant on Media and Publicity, Mallam Garba Shehu, dissociated his office from an advertorial published by a faction of the APC in the state alleging that Audu was not Buhari’s preferred choice in the primary election.

Noting that Audu emerged through a democratic process endorsed by the party leadership, the statement said President Buhari was not unaware of the outstanding role played by the former Kogi governor in his emergence as the APC presidential candidate, adding that it was incumbent on all forces to rally round the party’s standard bearer to effect the change in the state.

“As a democrat himself, the president has nothing but respect for the outcome of the Kogi primaries.

“Democracy is about the people’s choice, and so whoever the voters have chosen to represent them, that is the person the president will support.

“There are long years of fruitful political association between President Buhari and Prince Audu, as a result of which the president cannot but wish the governorship candidate well.

President Buhari, the statement said, counselled “the leaders of the APC in Kogi against petty differences, urging them to focus more on bigger issues of party growth and development, and to close ranks to do all that is lawful to ensure the victory of the APC candidates.

“On account of party interest alone, the forces in Kogi politics need to rally round our candidate to complete the process of Change, which began with APC’s victory in the National Assembly elections in the state. Kogi should not be missing from the Change sweeping across the country”.

President Buhari will lead 22 governors of the APC to the grand finale of the political rally of the Kogi State APC governorship candidate, Prince Audu.

He was unable to attend the launch of the campaign and flag presentation to the standard-bearer at the weekend.