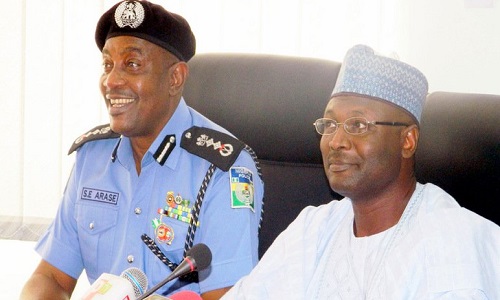 Chairman of the Independent National Electoral Commission, Professor Mahmood Yakubu, ​has ​declared that the next governor of Kogi State would be decided by the electorate, and nobody else.

The governorship election in Kogi holds this Saturday amid accusations by the Peoples Democratic Party (PDP) that the Presidency has concluded plans to rig the exercise in favour of the All Progressives Congress candidate, Prince Abubakar Audu.

Speaking when he received the Inspector-General of Police, Solomon Arase, at INEC headquarters in Abuja on Monday, Mr. Yakubu said the leadership of the commission would be in Kogi on Tuesday to assure everyone ​that there was nothing ​”​unsure​”​ in what it was doing regarding the forthcoming election.

“The only commitment we have to this country is to guarantee free, fair and peaceful poll.

“The decision as to who becomes the governor of Kogi state or any state in this country ultimately rest​s​ with the people.

“INEC will continue to uphold the sanctity of the ballot”, he said.

The INEC chairman said although he and other members of the commission were sworn-​in a week ago, there was an existing system, which he intends to strengthen and deepen.

Prof. Yakubu added that the meeting between the commission and the police was in furtherance of INEC’s commitment to free, fair and credible election, saying the management of the electoral process was not only that of INEC.

The INEC boss explained that the sole agenda of the meeting was to discuss with those who were responsible for providing security to ensure free and fair election.

“In 2011, in response to the outbreak of violence after election, sometime before and during elections, the commission established the Inter-Agency Consultative on Election Security, and this is at various levels.

“At the local government level, it is by the electoral officers and the division police officer.

“The purpose is to create an atmosphere for Nigerians to go and freely vote for the candidate of their choice without fear, intimidation and harassment”, Mr. Yakubu said.

Speaking earlier, Mr. Arase said the police force was partnering with sister security agencies to ensure that political thugs and other miscreants were not allowed to hijack the election in Kogi.

“Ours is to ensure we dominate the security, not to allow anybody to assault the electoral process, while we allow INEC to do its job”, Mr. Arase said.