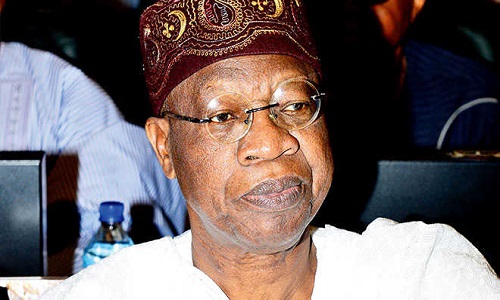 Governor Ayo Fayose of Ekiti State has described the newly appointed Minister of Information, Alhaji Lai Mohammed, as unfit to speak for any decent government, saying; “he speaks like a tout”.

The governor’s Special Assistant on Public Communications and New Media, Lere Olayinka, stated this in a statement on Tuesday.

The statement, which was a reaction to an earlier one issued by Mr. Mohammed that Governor Fayose and others kicking against President Muhammadu Buhari’s Treasury Single Account, TSA, policy should return to elementary school to learn mathematics, said it was shameful that the information minister dodged the main issue and chose to attack personalities instead.

“Now that Daddy Lai Mohammed has been elevated to the position of the spokesperson of the Federal Government of Nigeria, he needs to be purged of the APC basket mouth syndrome that made him to speak like a tout”, Mr. Olayinka said in the statement.

He also insisted that the Federal Government must explain to Nigerians why and how it mortgaged their existence to a single company that has made what no manufacturing companies with thousands of employees can make in one month.

Mr. Olayinka said, “Ekiti State under Governor Fayose is managing its finances perfectly well without the Treasury Single Account, which is obviously aimed at enriching a few individuals at the expense of Nigerians”.

The governor’s spokesman advised President Buhari to urgently “de-brief” Mr. Mohammed, who was the immediate past National Publicity Secretary of the governing All Progressives Congress, APC, so that he will operate normally as the mouthpiece of government and not a party propagandist.

“At 63, Lai Mohammed should know that speaking for the federal government of Nigeria is different from speaking for the APC, which he did by always tying corn to his anus while dancing naked at the market place.

“He should know that opposition is a major ingredient of democracy and any democratic government devoid of opposition must be ready to embrace anarchy.

“It is therefore the duty of Nigerians, especially the National Assembly to ask questions on the administration of the resources being held in trust for them by those in power and it is the responsibility of government at all levels to explain.

“When a man like Lai Mohammed, who is employed and being paid with tax payers’ money now choses to insult Nigerians just because they ask questions, sane minds should pity the President who employed such a loquacious person to speak for his government.

“As for Governor Fayose, he will continue to uphold the truth and speak in the overall interest of Nigerians, not minding the offensive odour emanating from the propaganda infected mouths of Lai Mohammed and his ilk”, the statement said.