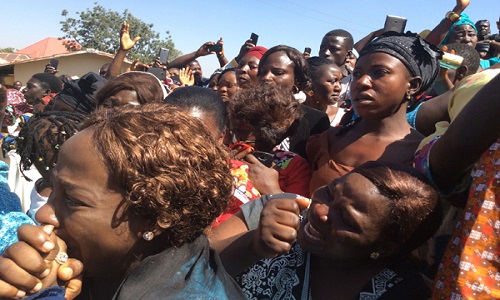 The atmosphere in Plateau State was charged yesterday as the candidate of the Peoples Democratic Party, PDP, in the last gubernatorial elections in the state, late Senator Gyang Nyam Shum Pwajok, was committed to mother earth.

Pwajok passed on in an Indian hospital about three weeks ago.

The former senator, no doubt was a man of the people and this much was confirmed when they trooped out in their numbers to bid him farewell to his final resting place.

From the Jos University Teaching Hospital (JUTH) mortuary where his remains was carried as early as 8am to the Church of Christ In Nation (COCIN) Du, Jos South LGA for the burial mass, a long convoy of vehicles, rarely seen, followed the late Sen. Pwajok’s corpse on his final journey.

At the funeral service at COCIN yesterday, Senate President Bukola Saraki described the ex-senator as an embodiment of humility, adding that during his tenure in the red chambers, he contributed immensely to the current peace in Plateau State.

Represented by Senator Emmanuel Bwacha, the Senate president said Plateau State and indeed, Nigeria, had lost a brave and vibrant leader who lived and worked for the peace and unity of the nation.

In his eulogy, the senator representing Plateau North and immediate past Plateau Governor, Dr. Jonah David Jang, who is widely regarded as the political father of the late Pwajok, described the deceased as a sharp intellect, a vibrant character and a resilient spirit.

Jang, who was visibly shaken by Pwajok’s death, wondered: “How could this rare star be dimmed so prematurely? We weep in anguish and wonder why fate is so cruel to us.

“But God is never cruel to us. Yes, His ways are sometimes strange, unfathomable to us, but we must not despair. We must still thank Him even for what He has done.

“In our eyes, Gyang’s life was sadly too short. But we cannot measure the worth of a man’s life by the days he sojourns here. Rather, we should assess it by how much he impacts society.

“Gyang was indeed a great man, a great inspiration and profound blessing to his time. He will continue to excite fond memories in generations to come, especially the youth whom he loved so much”.

For Governor Simon Lalong of Plateau State, he has lost a reservoir a knowledge, which he was hoping to tap from for hete benefit of the state.

“I regret the death of GNS Pwajok; I questioned why he died so early in age. But I cannot question God Almighty who created GNS Pwajok”, he said.

Lalong continued in his eulogy of the life and times of the late senator: “The man has a vision for Plateau State and I will not allow that vision to die with him. I will work with the family to get his development blue print for me to implement it for the benefit of Plateau citizens whom GNS Pwajok loved so much.

“As a governor, I had sincere intention to tap into the vision of GNS Pwajok in developing the state. It is therefore a great loss to my administration that he has to die now. I have no one to consult for ideas any more.

“I know GNS has a rich store of ideas for the growth of the state. Only God knows why the man died without fulfilling his mission for the people of the state. It is so painful”.

The running mate to the late Senator Pwajok during the governorship election, Yilji Gomwalk, described his deceased boss as “a man with a large and gentle heart who accepted all indiscriminately. He always thought of others before himself”.