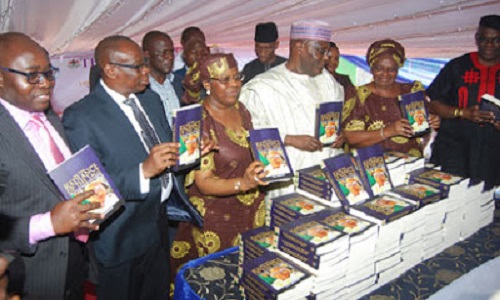 The former vice president paid this glowing tribute to the memory of the deceased in Ikenne, Ogun State, while presenting to the public, a book titled – “In the Radiance of the Sage: The Life and Times of HID Awolowo, a biography of the late wife of Chief Obafemi Awolowo (SAN)”.

According to Mr. Abubakar, HID was not only a loyal and supportive house-wife, she was one that helped her husband, the late premier of old Western Region, Chief Obafemi Awolowo, to attain success in life.

The 311 – page book was written by Prof. Wale Adebanwi and reviewed by Prof. Adigun Agbaje.

The book, which chronicled the life and times of HID Awolowo, also discussed many key moments in the deceased’s life, the key roles she played in the life of her husband and the politics of the then Western Region.

The former vice president said: “I know it is a cliché to say that behind every successful man there is a woman. It may even sound somewhat sexist in this day and age when women’s achievements are deservedly receiving more recognition. However, it has long been known that ChiefAwolowo owed a large portion of his success to his beloved wife of 50 years.

“Of course Chief Awolowo’s life was not only about successes and triumphs. He had his low and very challenging moments in life and politics – suffering state-imposed restrictions on his physical movement, exile in Lekki Island and imprisonment – all arising from political crises in the Western Region and attempts by his political rivals to seize those opportunities to weaken or destroy Awo politically”.