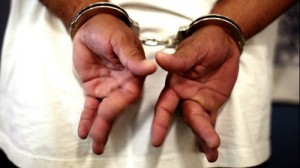 A man identified as Husseni Diyaya Allam has been arrested by police operatives in Lagos for disguising as a woman to defraud men. The suspect was nabbed around CMS, Lagos Island, alongside one Hasimu Solli, during a scuffle in the area.

The Nation gathered that Solli, who had spent about N15, 000 on the suspect he knew to be Khadijat, was trying to convince her to follow him to his house since they were planning to get married. During the scuffle, a police patrol team from Lion Building Police Station saw the duo and took them to the station for peaceful settlement.

It was gathered that Solli discovered during interrogation at the station that his supposed wife was actually a man. Upon further interrogation, the suspect, a resident of 19, Opeloyeru Street, Onipanu, Lagos, has defrauded several men under the guise of marrying them.

Our correspondent gathered that Solli has even spent N15, 000 on the suspect, thinking he was investing in his would be wife. Confirming the story, the state command’s spokesman, Joseph Offor, a DSP, said the suspect has confessed that he has been doing it for over two years.  Offor said the suspect, a Kano State indigene, will be transferred to the State Criminal Investigation Department (SCID) for further investigation.