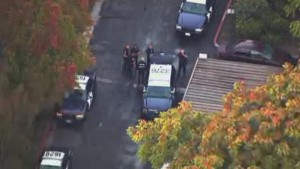 Authorities say a man shot himself in the foot and the round went through a floor, hitting a 9-year-old sleeping boy.

Police say the man who fired the gun and the boy were both taken to a hospital to be treated for gunshot wounds. Police say the wounds are considered serious but not life-threatening.

Police are still investigating to determine if the shooting was an accident. No one has been arrested.