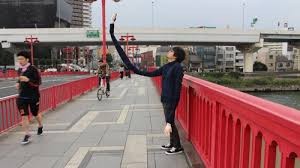 A Japanese man named Mansun has invented a new contraption that’s supposed to be an improvement on selfie sticks. It’s called the ‘selfie arm’, and as the name suggests, it’s a super-long stick fitted with a fake hand.

Mansun said that he felt compelled to invent the device because he was too embarrassed to use selfie sticks in public.

But he might just have made things worse for himself, because selfie arms are way more ridiculous – they’re just selfie sticks concealed inside an altered shirt with extremely long sleeves and fake hands attached at the ends.

Thankfully, he isn’t planning to mass produce the device, but he’s provided detailed pictures for anyone who might be interested in making their own set of arms.

The photographs he posted online are bizarre, but Mansun seems happy to be walking around with two ginormous, creepy-looking fake arms hanging at his sides, instead of carrying a selfie stick. Well, whatever floats his boat!