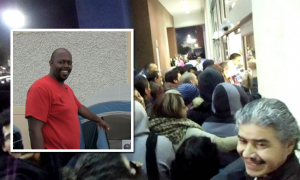 According to Scoop, Best Buy employee who witness the “massacre” as he puts it says “Mr. Gunter was going to be the first person to enter the store.” But as he walked towards the front door with a smile on his face a mob of shoppers ran in behind him and he slowly collapsed onto the ground another employee says he seen about 200 people run over his body including children not one person stopped to help him.