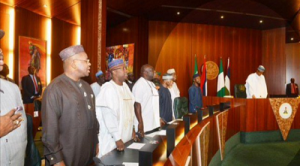 Former president of the Nigeria Labour Congress (NLC) and Governor of Edo State, Adams Oshiomhole of Edo State remains loyal to his roots as he, yesterday, disagreed with other governors of the country on the ability of the states to pay the N18,000 minimum wage. He said they must pay.

The governor recalled that the minimum wage was agreed between the Federal Government and the organised labour by the previous administration. He, therefore, told the governors and other elected political office holders that democracy cannot be run at their comfort and convenience.

“I am a labour man, I have been clear with my colleagues in seeking to find solution to the problem we face. We have to be holistic, we cannot at one hand question the wisdom behind the national minimum wage. I joined the NLC to protest to the National Assembly when they were going to amend the constitution to make the minimum wage a concurrent issue.

“I believe that the issue in the economy hasn’t got to do with minimum wage. I have always also reminded my colleagues that the minimum wage was not imposed, it was negotiated and state governments agreed to it, the president signed it not under duress, there was no strike to compel the then president to sign it, he signed it voluntarily.

“I believe when you look at the minimum wage, as it is today at N18,000, it is less than 100 dollars. I think it is now about eighty dollars. Now, divide eighty dollars by 31 days, you will be getting about two point something dollars.

“Now we cannot argue that workers in Nigeria formal sector should not earn more than two dollars a day, I cannot subscribe to that because the heart of governance is the welfare of the people,” Oshiomole said.

“Let me also say that I acknowledge that there are huge issues with the economy, there are huge issues about management capacity and I have been loud about the massive abuse and the looting of our common patrimony. My only complain is that the NLC voice was not loud when it matters, when the looting was going on, there was what I can call a criminal silence by the NLC. When the CBN governor raised the alarm, the NLC would have risen as a partner and I have always warned that the consequences of what the big people would do, will always fall on the small people.

“It is NLC business to interrogate every policy that will have immediate or long time consequences. What we have now is the medium term consequences of the massive looting and the gross mismanagement of our economy at the time when the oil peaked at $108, now at under $50, we are suffering a huge drop of 50 percent of national revenue and with a huge debt profile.

“So, on the one hand, you are looking for huge resources to settle debts incurred even in the midst of plenty and having to grapple with basic needs at the moment when oil prices have crashed. For me even if you abolish wages, it will not automatically translate to solutions.”