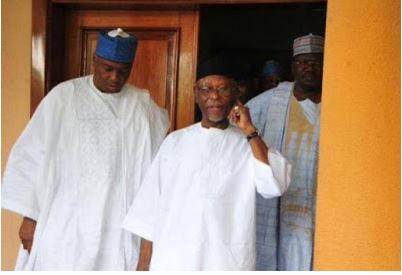 Well, he’s done what they wanted him to do so reprieve may be coming the way of Senate President Bukola Saraki in respect of his travails at the Code of Conduct Tribunal (CCT). According to a report by Tribune, some leaders of APC who were impressed with the way he handled the screening and confirmation of all 36 ministers, now want the trial to end. They reportedly met recently to find ways to reconcile Buhari and Saraki

A source in the party told Sunday Tribune that the party chiefs were impressed that Saraki got the Senate to clear all the nominees, despite some real bottlenecks laid on the path of some of them.


“You can see that even in the days when the PDP had overwhelming majority, it was not always certain of getting all the ministerial nominees through the Senate. Most times, the Senate, even with an overwhelming majority of PDP members used to reject nominees of PDP presidents. But with a slim majority in the current Senate, the Senate President secured clearance for all our nominees. This is a good omen,” a leader of the party said.


The party chiefs also said that in the process of securing confirmation for all the nominees, Saraki also helped the APC secure its most-needed unity in the Senate, thus ensuring that the majority secured by the party was put to good use.

“It was the unity among APC senators that ensured the confirmation of Chief Rotimi Amaechi. If the division had remained, we won’t be able to achieve that, because all the PDP senators needed was just a few dissenting voices from the APC,” another source said.

“I have it on good authority that leaders of the party are insisting that one good turn deserves another and that they will work on Buhari in the new week to ensure that the party reciprocates the gestures shown by Saraki. The man has given indication that whatever the APC policies are, they can rely on the Senate as an ally,” another source stated.