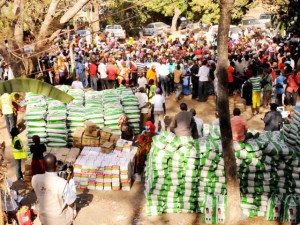 The United Nations High Commission for Refugees (UNHCR), on Thursday, said that the population of Internally Displaced Persons (IDPs) in the North East had risen to 2.2 million.

Speaking in Abuja during the UNHCR 2015 stakeholders’ briefing of the commission’s representation in Nigeria, the UNHCR Representative to Nigeria, Ms Angele Dikongue-Atangana gave the statistics, but said that the increase was not as a result of new displacement.

“The number of IDPs is not really increasing as a result of new displacement.

“There could be some relatively small new displacement in the course of combating insurgency and knowing that the insurgents themselves still remain active, especially in this hit and run tactic.

“The number is increasing specifically because regaining control of the territory by the military opened further access for the humanitarian officials so they can count many more IDPs, be they old IDPs or very recent ones,” she said.

Dikongue-Atangana disclosed that UNHCR had recorded success in its 2015 operational activities in Nigeria including addressing refugee and IDP plights, advocacy on statelessness, and collaboration with ECOWAS.

According to her, the commission in its action plan supervised the voluntary repatriation of 452 Cameroonian refugees back to their country.

She said that plans were already in progress to repatriate 165 others back to their country before the end of the year, while resettling others to a third country in Europe, and the U.S.

She said that UNHCR was working closely with relevant bodies to ensure that IDPs had their basic rights especially the right to existence, food, shelter, education, security, amongst other amenities.

She also said that the agency would not relent in its humanitarian support to Nigeria, urging partners and donor agencies to assist refugees and displaced persons.