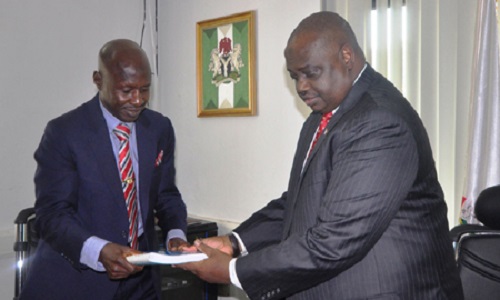 After four years at the helms of affair of the Economic and Financial Crimes Commission (EFCC), Mr. Ibrahim Lamorde, said yesterday that his exit from the agency was an act of God.

Speaking extempore on Wednesday when he formally handed over to the acting chairman, Mr. Ibrahim Magu, Lamorde said it was only natural for office holders to leave the stage for others to come in, warning the anti-graft agency’s officials against sabotaging the efforts of his successor.

The ex-EFCC boss’ remarks left members of the management and workers in a pensive mood.

He said: “It is historic to witness yet another handing over. I will be doing this for the second time because I did a similar one for a former Chairman, Mrs. Farida Waziri, in 2008. I will be doing this to a friend and a colleague. Magu has been with the commission since 2003 and we all came back together in 2011.

“As I said the last time I was addressing the workers, even if you are the one who built this place, you will leave here one day. Everything that has a beginning must have an end.

“From the day you were born, you prepare for your death. If some people don’t leave office, others will not come in

“Please support Magu, whom we all call ‘General’. I know as human beings, there are those who felt they should have been the person here (the appointee), but God Almighty gives power to who he wants and when he wants.

“It is important we take this as an act of God. If you take things as coming from God, you will not have problem, you will not blame human beings and you will have peace with yourself.

“Contentment with life is what gives you joy in living. If you have no contentment, you will be a frustrated human being”.

Looking back on his tenure, the former EFCC chairman said he took all decisions in the best interest of the agency.

He said: “I believe whatever achievements we have made, each one of you supported the process.

“As human beings, there is no way you can agree with every decision taken. We believe all decisions were in the best interest of the organisation. These decisions may not have gone down well with some people, at least the majority of you supported us”.

Lamorde urged the officials to stop acts of sabotage, mudslinging and what he termed “Pull Him Down” syndrome even as he disclosed that those in the habit of working against the system are in the process of being identified and “I know it will soon be a thing of the past”.

While expressing concern that some people are deliberately “inflicting injuries” on the system, the ex-EFCC chair reminded those engaging in sabotage that their actions are destroying their organisation.

“You will think you are attacking the leader, but it will rub off on you”, he said.

“Please, give Magu a chance to work and lead this organisation. People should not distract him with unnecessary issues or observations.

“We are lucky because Magu is familiar with the system. Not many organisations are blessed with this kind of opportunity of having someone from the system succeeding his colleague”, he added.

Lamorde also advised the officials to be courageous in reaching out to Magu on any issue, instead of running him down.

Said he: “It is always good if you disagree with the decision of your leader to approach him directly. Don’t undermine him. Please, I urge you, he should be supported. Leadership is just like first among equals.

“It is Magu now, it is not Lamorde. This is the man of the moment. His popular name is ‘General’. The ‘General’ is taking over, we have to give him maximum support to succeed.

“If something goes wrong, he may be blamed as a leader, but everyone of us will carry the blame”.

Lamorde’s inspiring remarks earned him a big round of applause because he spoke without betraying his emotions.