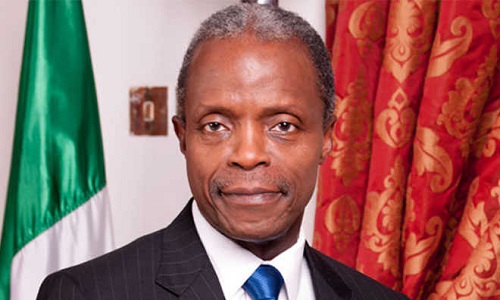 The Vice President, Prof. Yemi Osinbajo (SAN) has denied speculations that he is in talks with MTN over the $5.2 billion fine imposed on it by the Nigerian Communications Commission (NCC).

His Senior Special Assistant on Media and Publicity, Mr Laolu Akande, made the denial on Monday.

The vice president has shares in MTN Nigeria, according to details of his assets declaration form submitted to the Code of Conduct Bureau and made public early September.

MTN had said yesterday that it was in talks with the Presidency, internal security agencies and the NCC about the fine imposed on it for failing to disconnect the SIM cards of unregistered subscribers and other users with incomplete registration.

“The Office of the Vice President is not in talks with MTN over the issue. If there is any talks at all with the MTN, I guess the executive body of the government that is responsible is the NCC”, Mr. Akande said yesterday.

It was reported that a delegation of MTN officials from the company’s headquarters in South Africa, led by its Chief Executive Officer, Sifiso Dabengwa, are in Nigeria to plead for a lower penalty.

NCC gave MTN until November 16 to pay the fine or face more sanctions including suspension of license.

An NCC official confirmed that the MTN delegation from South Africa is in the country.

He said, “I can confirm to you that, yes, the MTN big guns are in the country. They have been in touch with us though we are yet to meet officially. We have told you we are not directly in charge of this case again. The office of the National Security Adviser (ONSA) has taken over. Coming to us may not bring out anything meaningful for them. Yes, they are putting pressure on us, but we are not going to yield to it…We are not ruling out any diplomatic settlement. We believe the Presidency has the final say”.