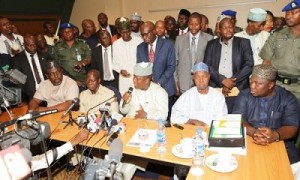 Leaders of the Nigeria Labour Congress (NLC) and Trade Union Congress of Nigeria (TUC) have warned governors in the country not to think of paying anything less than the N18,000 minimum wage, saying that if the governors wanted workers to shut down the nation because of the issue, workers would gladly do so.

Rising from a meeting of the Nigeria Governors’ Forum (NGF), the governors had said the N18,000 minimum wage was too much for them to pay, especially at this time of dwindling government revenues.

Factional President of the NLC, Mr. Ayuba Wabba, while insisting that Nigerian workers totally reject the governors’ position, warned that if the governors wanted organised labour to close down the country, labour was ready to do so. He confirmed that the NLC would be meeting today on the platform of the Central Working Committee, CWC, and the issue would feature prominently after which a statement would be released.

“We reject it totally. Nigerian workers will never accept it. We all know that it is a reality that N18,000 can no longer take the workers home and cannot sustain any family. Many countries are reviewing their minimum wage upwards to meet the current realities. In Nigeria, there is even greater need to increase the minimum wage because our currency had been devalued; inflation keeps rising among others.

“What is the relation of the Nigerian currency to the Dollar or what is value of the N18,000 to the Dollar? We are going to reject the move with all our might. We are not the cause of the problem. They should think out of the box to find solution to the problem. When there was excess crude money, the workers did not benefit and so, we cannot bear the brunt. If the governors want us to close down the country, we will do that.

“What about their outrageous salaries, bloated overhead cost, inflated contracts and others? NLC is meeting tomorrow (today) on the organ of the Central Working Committee, CWC. This issue is going to feature prominently and we are going to come with a strong statement on it. Obviously we cannot bear the brunt. They governors should think how to generate revenue instead of depending on oil money and allocation from Abuja.

“The governors should know that the N18,000 minimum wage was not just negotiated, it was a product of a tripartite process involving the governors, employers and organised labour. It passed through the National Assembly before former President Jonathan signed it into law. If any party wants to breach or renege on such agreement, they should be prepared for the consequences.

“We know there are challenges, but the governors should face reality. The problem is the cost of governance and too many frivolities. Today, with crazy bills from electricity providers, increase in fuel price, school fees, hospital bills, and other utilities, N18,000 cannot take any worker to the bus stop. We want to know their salaries as approved by the Revenue and Fiscal Mobilisation Commission, that of their commissioners, advisers and others, their security votes and others.

In a similar vein, Wabba’s counterpart, Mr. Joe Ajaero, dismissed the governors’ resolution as an empty threat. He said most of them were ignorant of the process that brought about the N18,000 minimum wage, warning the governors not to start a battle they could not sustain because Nigerian workers had the capacity to retrench them.

“Well, because of the falling oil prices, sole administrators should be appointed in the 36 states and Abuja and the office of state governors should be abolished. The sole administrators should not have one single commissioner or adviser. They should also not receive any salary or allowance because we are in a belt-tightening period for us to survive. The governors should know that the process that brought about the N18,000 minimum wage was more democratic than the process that brought most of them to power. They do not have the capacity to abolish the minimum wage. We are even planning to present a new proposal for upward review of the wage because, not only is it due for review, it is also no longer in tune with the socio-economic reality of the time.

“Do not forget that the minimum wage is an act that was passed into law by the National Assembly and signed into law by former President Goodluck Jonathan in March, 2011. The day the governors say they can no longer pay the N18,000 minimum wage, that is the day they should vacate office as governors. They should not make the mistake that workers have no capacity to retrench them from office.”

According to him, the governors cannot say they can no longer pay the minimum wage. “If they do, we are going to reject and resist it with whatever it takes. Though we will meet to react appropriately, but we are definitely not accepting it. We are presenting a proposal for upward review of the wage because it is no longer meeting the realities on ground. We were planning our meeting for next month, I am sure because of this development, we will bring it forward.”