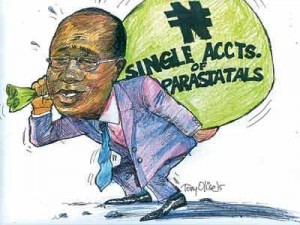 SystemSpecs, the owner company of Remita, the e-payment and e-collection software deployed by the Federal Government to drive the Treasury Single Account (TSA), has said only N7.62 billion was taken as fees by the three implementers of the project, and not N25 billion, as claimed by its accusers.

In a document obtained by The Nation, the firm also described the N2.5 trillion transaction volume as false, saying only N1.36 trillion passed through 20 participating banks from the inception of the project to date.

Senator Dino Melaye (Kogi West) last week alleged on the floor of the Senate that the firm was making about N25 billion per day for facilitating compliance by the MDGs with the TSA directive.

Melaye described the company as “financial scavengers and economic cankerworms”, trying to sabotage the anti-corruption war of the Buhari administration by mismanaging the TSA.

A senior executive at SystemSpecs, who pleaded anonymity told The Nation that the company was never paid the said sum.

According to him, at the commencement of the project in May 2012, it was agreed that one percent of the sums collected from MDAs would be deducted and shared between SystemSpecs, the banks and the Central Bank of Nigeria in ratios of 0.5 percent, 0.4 percent and 0.1 percent.

A breakdown of the transaction inflow via the TSA showed that SystemSpecs is to refund N3.8 billion; 20 banks to refund N3.05 billion and the CBN is to refund N760.96 million, being total fees received by the institutions.

The SystemSpecs executive also said the over N200 billion, which passed through the banks from October 27 to date, was also part of the N1.36 trillion grand total figure.

The source said the banks were holding talks with their lawyers and will sue the Federal Government for breach of contract.