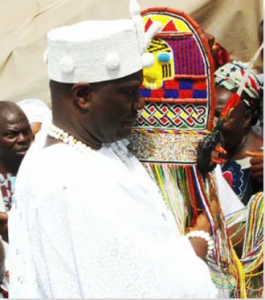 It is believed that there are 201 deities spread around the ancient city of Ile-Ife, Osun State. Together, they crowned the 51st Ooni of Ife, Oba Adeyeye Enitan Ogunwusi, yesterday, at Oke Ora, the spot where Oduduwa, the progenitor of the Yoruba race, first wore the crown. The king was presented with the Aare crown after coming out for the first time from the 21 days traditional rights to the throne.

The event at Oke Ora, a community located between Ife and Osu town, took place around 1pm at Olokuta Hills, when the crown was invoked by Olojudo of Oke Ora, simply identified as Oba Sikiru.

According to some traditionalists who accompanied the monarch, Oba Ogunwusi could not wear the crown because it is worn only once in a year during Olojo festival which is just a few days away.

As early as 5 am, the monarch began the rites that would last all day by wearing Seseefun crown, otherwise called Ade Obatala, and began a spot-to-spot observance of rituals across Ife town.

The monarch, dressed in a white material, was accompanied by members of Isoro cult, some Ife traditional high chiefs, and many indigenes of the town.

Activities in the ancient town went on for several hours, paralyzing movement as most people particularly women stayed in doors while the various rituals were performed.