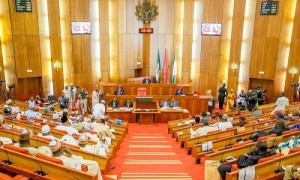 The Senate on Thursday said the country was losing about N4 trillion to illegal mining activities annually.

It, therefore, ordered its Committee on Solid Minerals during plenary to carry out the investigation into the issue, noting that the development was worrisome, especially with current low performance of the oil sector.

The Senate also directed the Inspector-General of Police and other law enforcement agencies to live up to their responsibilities, particularly, by arresting and prosecuting illegal miners. It urged the executive at the federal, state and the local government levels to take concrete steps to end illegal mining activities.

These came following a motion by Sen. Duro Faseyi (PDP Ekiti North), seeking an end to illegal mining in the country.

Faseyi drew the attention of the senate to the “worrisome and unlawful plundering” of the nation’s solid minerals sector by local and foreign illegal miners, especially at a time the country’s economy is plundering.

He claimed that illegal mining had resulted in the loss of over N8 trillion by the nation “every two years”.

In his contribution, Sen. Lanre Tejuoso (APC Ogun Central) pointed out that the solid minerals sector was not as successful as the petroleum sector in terms of revenue generation.

He blamed the situation on Federal Government’s monopoly on the returns from solid minerals “unlike the liberality enjoyed by the oil sector in terms of control of its revenue”.

Tejuoso suggested that the senate should make laws to empower state governments to have jurisdiction to harness solid minerals for more productive exploitation.

Senate President, Bukola Saraki, in his remarks, said that government would do everything within its powers to tackle the challenges in the mining sector.