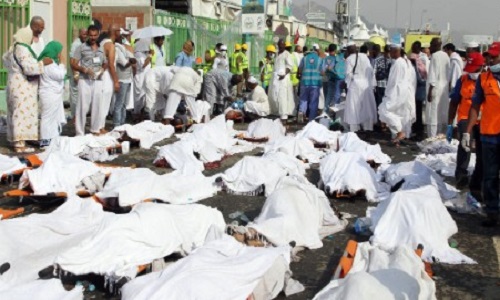 The death toll of Nigerians in the Saudi stampede has risen to 274, the National Hajj Commission of Nigeria (NAHCON) said yesterday.

Forty four others are still missing while two are receiving treatment in Saudi hospitals, the agency’s Commissioner in charge of Planning, Research Statistic Information and Library Service (PRSILS) Dr Saleh Okenwa, disclosed at a press briefing in Abuja on Monday.

Okenwa expressed the determination of the commission to continue to work with relevant stakeholders to account for the remaining pilgrims that died in the stampede.

“The number of Nigerians confirmed dead in the stampede is 274; those injured and on admission in Jeddah are two, while 44 remain officially declared missing.

“This was a year that the Saudi Arabia government did their best to ensure the success of the Hajj exercise and safety of pilgrims, but Allah decreed that this will happen”, Okenwa said.

He said the Saudi Arabian Government had not responded to Nigeria’s request to be part of its committee set up to probe the incident.

Chairman of NAHCON, Alhaji Abdullahi Mohammed, said it is the prerogative of the Saudi Government to decide the composition of the committee investigating the stampede.

He said Nigeria had not received any compensation pledged by Saudi Arabia for the victims of the Sept. 11 crane crash at the precinct of Ka’aba (the Grand Holy Mosque in Mecca).

The Head of NAHCON medical team, Dr Ibrahim Kana, said efforts were being made to find the 44 missing Nigerians using the DNA samples of their family members.

He added that the sample would be collected and sent to Jeddah, Saudi Arabia, for cross matching of the 44 missing Nigerians.