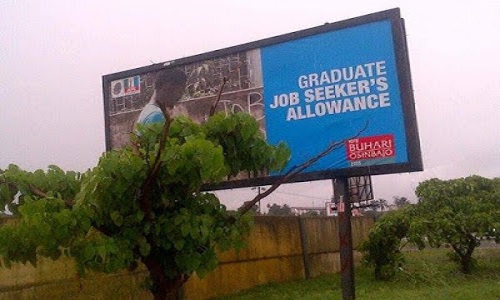 The All Progressives Congress (APC) has assured Nigerians that it will not renege on its campaign promise to pay N5,000 each monthly to 25 million most vulnerable Nigerians.

The governing party was reacting to the statement by the opposition Peoples Democratic Party, PDP, that the APC and President Muhammadu Buhari deceived Nigerians by promising what it could not fulfil.

While calling on the citizens to ignore the mischievous attempt by the PDP to confuse and mislead them on this issue, the APC said even though the PDP-led Federal Government plundered the common wealth in its time, it (APC) has devised creative means not only to pay the money, but also to fulfill its other campaign promises to Nigerians.

In a statement on Friday by its National Publicity Secretary, Alhaji Lai Mohammed, the APC said “the non-implementation of the payment policy so far is due to the fact that it was not included in the 2015 budget, which was prepared by the PDP-led Jonathan Administration, and also because of the need to first block all financial leakages”.

It explained that the Buhari administration has been busy putting into place measures that will make it possible to start the implementation of this project. Such measures include the introduction of the Treasury Single Account (TSA).

“We are happy to inform Nigerians that as at the end of September 2015, over 1.4 trillion Naira – which hitherto was lying unproductively in various commercial banks – has been recovered and paid into the TSA”, APC said.

The party said that in its usual jumpy and superficial approach to issues, the irresponsible opposition has already rushed to judgment on the issue without bothering to hear from the APC, which made the promise in the first instance.

“Had the PDP not sacrificed the truth on the altar of political expediency, it would have realized that the APC never at any time indicated it has reneged on its promise to pay 5,000 Naira monthly to 25 million most vulnerable Nigerians.

“In our press statement of Aug. 30th 2015, we still reiterated our plan to redeem our campaign promises, including the social security payment policy, despite the primitive looting of the treasury under the watch of the PDP”.

“It is therefore astonishing that the same PDP, which is becoming more and more infamous for its penchant for peddling half-truths and sensationalizing every issue, will rush to the press to celebrate the figment of its imagination that the APC will not fulfill its campaign promise regarding the payment”, it said.

The APC said the Buhari administration is also embarking on a massive infrastructure renewal programme in the areas of roads, rail and power, for which a 2.5-billion-dollar Infrastructure Fund is being put in place.

“Contrary to the disinformation being peddled by the PDP, the Buhari administration is poised to lift millions of Nigerians out of extreme poverty by providing social protection and safety nets with another 2.5 trillion Naira Special Intervention Fund”, the party said.