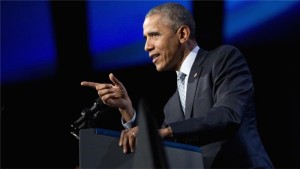 US President Barack Obama has threatened to impose trade sanctions on South Africa for blocking imports of meat from the US. Obama said on Thursday that he will suspend South Africa’s right to ship farm products to the US duty-free unless it begins to dismantle barriers to American pork, poultry, and beef within 60 days. Aljazeera has more:

“I am taking this step because South Africa continues to impose several long-standing barriers to US trade, including barriers affecting certain US agricultural exports,” he said in a letter to Congress. At stake are trade benefits South Africa receives under the African Growth and Opportunity Act (AGOA) which is meant to encourage African countries to open their economies to trade.

The US says South Africa has been blocking US chicken imports for 15 years and has used “unwarranted sanitary restrictions” to keep out US pork and beef.  Mike Brown, president of the US National Chicken Council, backed the move and said it made no sense for the US to give special preferences to countries that treated it unfairly.

“This should send a clear message to South Africa and their poultry industry that they will not be given a ‘Get out of jail free’ card every time AGOA rounds the turn,” he said. South Africa exported $176m in agricultural products to the US under AGOA in 2014 and potential lost benefits are estimated to total $4m to $7m.