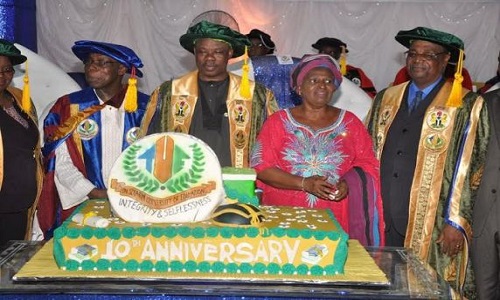 Former President Olusegun Obasanjo has urged Federal, State and local governments “to do more in the area of employment”.

Speaking at the 10th anniversary and 6th and 7th convocation ceremonies of Tai Solarin University of Education (TASUED), Ijagun, Ijebu Ode in Ogun State, Mr. Obasanjo warned “If there is no job for the unemployed to feed themselves and also to contribute to the development of the country then, we will all be sitting on gun powder”.

Obasanjo insisted “If University education was not for development then, it was not serving any useful purpose, insisting “It must be for development, personal, local, national and even global and that is very important”.

The former president stressed that education is a meal ticket for anybody that has it, adding that it is also a means of breaking poverty circle.

Obasanjo advised “I believe in lifelong education. Nobody should stop learning until he or she dies”.

On his decision to accept the award bestowed on him, ex-President Obasanjo said it was because of the personality the school was named after, adding he was one of the great and best educationist the country ever have.

“I don’t indulge in accepting Honourary award not even in Bells University of Technology. It became a must because of the personality which the University was named after. He is one of the best educationists this country ever have, then his memory should remain real with everybody”, he explained.

Secondly, he told the audience that it was a privilege to be honoured alongside the late Chief Hannah Idowu Dideolu Awolowo, insisting “Anywhere mama is been honoured, we must join hand to to honour her”.

Mr. Obasanjo further stated that he accepted the award because a decade in any human life was not a joke, stressing “I believe to honour this institution is an exercise that is worthy”.