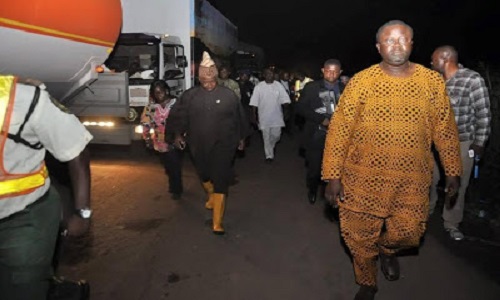 The Ogun State Government has denied reports in a section of the media attributing the ongoing palliative work on the Lagos-Ibadan Expressway to the Redeemed Christian Church of God, RCCG.

However, the state government in a statement on Thursday by the Senior Special Assistant to the Governor on Media, Adejuwon Soyinka, stated that the state Ministry of Works and Infrastructure was already spending millions of naira in putting the road in motorable condition.

He said, “The ongoing palliative work on the Lagos-Ibadan expressway is being handled by the Ogun State Ministry of Works and Infrastructure.

“Concerned about the plight of commuters on the ever busy Lagos-Ibadan expressway, the Ogun State Government, on Tuesday, embarked on palliative work on some bad portions of the expressway.

“Not minding the fact that it is a federal road, Governor Ibikunle Amosun, who was worried about the plight of commuters that spend hours in traffic gridlock on the road, directed the state Ministry of Works and Infrastructure to immediately fix the bad portions of the road and also construct drainages.

“In giving the directive, the governor was particularly concerned about the need to immediately bring relief to the road users especially as the Redeemed Christian Church of God and other churches on the ever busy road are also billed to hold events that will attract millions of worshippers this weekend”.

The statement quoted Gov. Amosun as saying that the efforts made at rehabilitating the road were to complement the work of the Federal Government.

Amosun was quoted to have said the state would not neglect federal highways in the state since all roads were being plied by Nigerians.

He said, “The intervention job on the ever busy expressway is an initiative of the Ogun State government to rescue millions of Nigerians who spend hours in the gridlock occasioned by some bad portions of the road.

“It is also on record that the Ogun State Government had carried out similar palliative measures on the Lagos-Abeokuta Expressway, Sagamu-Ogijo-Ikorodu road and other federal roads within the state because the state is strategically located in such a way that goods and passengers going to all other parts of the country have to pass through the Gateway state”, the statement added.