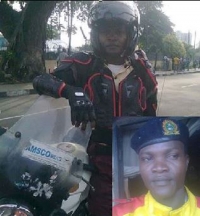 The late LASTMA officer who was called SS by his admirers, was killed on the line of duty on the Third Mainland Bridge while giving a helping hand to the driver of a broken down vehicle.

The okada rider involved in the accident also suffered arm fracture and is currently recuperating at the Gbagada General Hospital.

The late Shenuga, who rode a LASTMA motorcycle around his area of posting in the metropolis, was rushed to the Lagos State University Teaching Hospital (LASUTH), Ikeja where he died.

A LASTMA official who narrated the way the accident happened to The Nation said the late Shenuga was flagged down by a distressed motorist.

“He parked, removed his helmet and was trying to assist when a motorcyclist hit him. He was rushed to LASUTH and died the following day,” he recalled.

The late Shenuga was said to be among officers that gave situation report to the Traffic Radio Control Room, Alausa, Ikeja.

LASTMA General Manager (GM), Bashir Braimah described the incident as sad, adding that the late Shenuga’s remains had been buried. He also informed that the agency footed the hospital and funeral bills.

Asked whether the motorcyclist will be charged to court for the incident, Braimah said: “That is left for the police to handle.”

He assured his men that their welfare is paramount, urging them to see Shenuga’s case as an act of God, even as he appealed to motorists to see LASTMA officials as fellow human beings.

“They are family men and women like all other Lagosians. They have wife and children just like everybody; they have relations and most especially are your neighbours. So, why do people think of attacking them for trying to make life easier for the populace? They are always out there in the rain and under sun to keep traffic moving. Attacking them shouldn’t be contemplated at all,” he said.

Meanwhile, two weeks ago, the Lagos state government promised to recruit more people into the fold of LASTMA.

Recall that Young Arabamen, the immediate past chief executive officer of LASTMA was removed from office by the Lagos state government on Monday, November 2.

He was replaced with a retired assistant Inspector General of Police, Christian Akioja Olakpe.