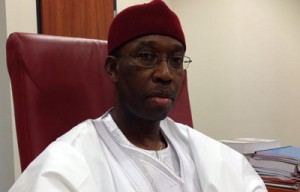 Delta State Governor Ifeanyi Okowa has decried the dwindling economy of the country. He blamed the state of the economy on poor receipts from oil proceeds.

Okowa said this during the opening ceremony of the 30th annual conference of Fisheries Society of Nigeria, FISON, held at the Asaba campus of Delta State University.

The governor, who spoke through the Secretary to the State Government, Chief Festus Agas, stressed the need for the diversification of the nation’s economy to agriculture.

He expressed the readiness of his administration to partner  FISON and other private sector organisations in  its efforts to improve the economy of the state through agriculture.