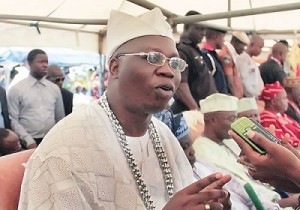 Leader of the Oodua People’s Congress (OPC), Otunba Gani Adams, has announced the launch of Oodua Radio/Magazine, in honour of the matriarch of the Awolowo dynasty, late Hannah Idowu Dideolu Awolowo.

According to Adams, who said the launch took place in London earlier in the week, the media will serve to project, enhance and showcase the Yoruba cultural heritage and tradition of the Yoruba to the world at large.

“Establishing the Oodua Radio and Magazine is a deliberate attempt to showcase Yoruba culture and ethics globally,” Adams said, stressing that there was an urgent need to resuscitate the Yoruba culture and tradition which he regretted were going extinct.

In his address, Tourism Editor of Tribune newspapers, Gabriel Akinadewo urged Nigerians especially the Yoruba to be culture ambassadors within and outside the country.

“We must all support the Federal Government by projecting the image and protecting the name of Nigeria for the change mantra to work and Oodua Radio is a platform for everybody living in London to do this,” he said.