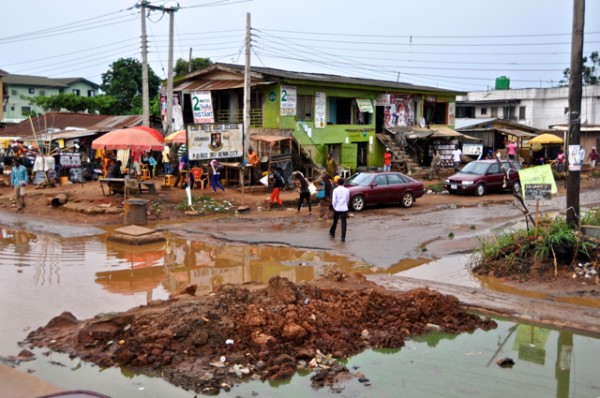 Publicity secretary of the PDP in Edo state, Chris Nehikhareto, has lamented that Governor Adams Oshiomhole has achieved practically nothing in Edo State considering the Gargantuan allocation he has received from 2008 till date.

Chris Nehikhareto said of particular note was the poor state of roads across the three senatorial districts of Edo State.

Speaking for the PDP, Chris Nehikhareto said the state government had collected over one trillion naira since assumption of office in 2008 till date more than any other government that had ruled the state and therefore, should desist from any form of excuses in fixing the numerous bad roads in the state.

“The state government uses the rains as an excuse for its incompetence and failure to do what is needful; there is nowhere in the world where rain has disturbed the work of man”.

“Rain did not come as a surprise, it is like pregnancy, so, when there is pregnancy you know that within nine months you prepare for the date of delivery. If the state government has failed to plan, Edo people should not be made to pay for their incompetence instead they should resign for his incompetence and their failure in excuse for rains”.

“Governor Oshiomhole isn’t worried as he plans to use his now familiar tactics of deploying caterpillars and mobilizing some contractors to site as soon as election is approaching, Mr. Governor, you cant fool Edo people again”.

Chris Nehikhareto listed over 35 local link roads within the state capital that it said were in a state of disrepair, the PDP said “a major concern of to Edo people is the dismal state of the inter local roads which has been worsened by the periodic play of utilizing them to curry favor with the unwary Edo public.

Mr. Chris Nehikhare urged the people of the state to remain peaceful and watchful as well and to “discard the acidic progressive concoction offer from the APC for the humane and people friendly platform that the PDP represents in choosing or electing a successor in 2016″.

“One who will clean and maintain the Edo Augean stable, and they will be proud of who will ensure peace and security through youth empowerment, human capital development and infrastructural development, among several other welfare packages for the entire state.

“Why is it always convenient that whenever elections are coming the caterpillars are seen, were there no rains before elections? Is it a coincidence that this rains happen when elections are not coming and as soon as election happens the rain ceases? We are not preempting them but we are telling them that they should not deceive Edo people”. He opined

“They should roll up their sleeves and get to work, we are tired of their incompetence,” he added.

PDP also lambasted Governor Adams Oshiomhole for what it called “a shame, disgrace and another incompetence, the eleventh hour trial of former governor of the state, Chief Lucky Igbinedion, seven years after he assumed office as governor of Edo state,” describing it as purely “a political witch-hunt”.

“The party will come out with a statement as time goes on because the governor since he left office in 2007 I think it is a shame and a disgrace that another form of incompetence that it is taking Oshiomhole another seven years to wake up from his slumber to do what I will call political witch-hunt.

“The laziness of the state government is glaring and I will leave the reaction to the target of the perceived probe and the party will make a response at the appropriate time but right now I think it is the ranting of desperate man who is trying to clutch any straw.”

Adams Aliyu Oshiomhole is a former labor leader, turned politician who 2012 was elected for a second term as the Governor of Edo State in Nigeria on the platform of the Action Congress.