Lucky Igbinedion And His Father Should Be In Jail, Gov. Oshiomole Attacks 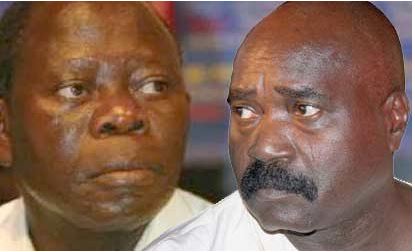 Speaking to students of the Ambrose Ali University who paid him a courtesy call at the government house, Oshiomole said the former governor and his father ought to be in jail. He said while in office, Lucky allocated 200, 000 hectares of government land to his father.

The governor said he’s since revoked it and that the decision has caused a friction between himself and the Igbinedions. Adams said if the former governor does not obey the law, he will go to prison or either relocate from the state

“I want to be remembered as the man who took from those who have bastardised, raped and privatised the resources of Edo state, used our money to build their private universities and walk around our streets when they are supposed to be in prison. Edo people will be shocked how they have been raped by the gang masters of original fraudster. I will publish records in black and white. I am going to publish all the assets, government-owned lands that Igbinedion the son has ceded to Igbinedion the father, properties of Edo people. Lucky Igbinedion gave out over 200,000 acres of government land to Gabriel Igbinedion, his own father. They took that land on the ground that they will use it for mechanised farming but Igbinedion took this land and gave to cocoa farmers, some of them from Edo, some from Yorubaland. These cocoa farmers will farm and sweat to grow their cocoa on government land yet Igbinedion will sit in his house on which he is not paying ground rent and be collecting royalties. Is Igbinedion the Oba of Benin? The great Oba of the great Benin Kingdom never subjected his people to that level of exploitation. I revoked the land and returned it to government and they got angry and have been fighting me. Igbinedion believes he is above the law but I told him that he must obey the laws made by government. If he faults the law, he will go to prison. Everybody born of a woman in this state must be subjected to the rule of law. If he does not want to obey those laws, he will have to relocate”he said.

Share
Facebook
Twitter
WhatsApp
Previous articleUniversity Of Bradford Scientists Predicts What Prince George Will Look Like At Ages 7, 20, 40 And 60 [PHOTOS]
Next article73-Year-Old Woman Hide Drugs In Her Privates In Attempt To Smuggle It To Her Jailed Son
- Advertisement -