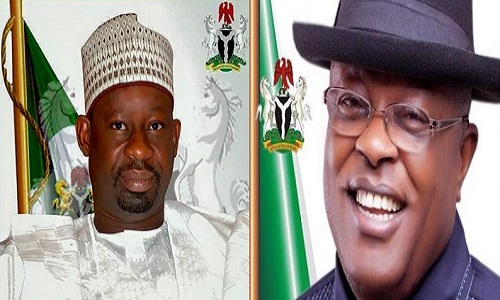 Palpable apprehension has gripped the Peoples Democratic Party, PDP, over alleged plans by two of its governors to dump the party on whose platform they were elected for the All Progressives Congress, APC.

It was learnt that despite the brave showing of the PDP during its one-day national conference at the Thisday Dome, Abuja, last week, many participants at the gathering were actually jittery on account of reports that some of the party’s governors might be on their way to the APC.

“There is anxiety in the party over reports that two of our governors, not one, are currently negotiating their exit from the party. We are worried. Any serious party would be worried”, a party chieftain told The Nation.

“This development was widely discussed amongst participants at the last conference in Abuja though we all agreed it should form part of our agenda for the meeting”, the source, a Senator from the South-West, declared.

One of the governors identified as planning to dump PDP for the APC is Governor Dave Umahi of Ebonyi State.

The governor was conspicuously absent at the Abuja confab, which was organized to rebrand and reposition the PDP ahead of 2019 presidential election.

Already, a former director of Governor Umahi’s election in Afikpo, Senator Azu Agboti, has already defected to the APC.

Agboti’s defection, it was feared, may not be the last in Ebonyi State even though the state governor was recently reported as saying that he had no reason to want to quit the PDP.

Also said to be planning to dump the PDP for the APC is a governor from the Northeast.

It is not difficult to fathom which one of the two only PDP governors in the region is planning to defect.

Already, some of his close political associates have joined the APC in anticipation of his defection.

The northeast governor in question was in attendance at the Abuja conference of the party.

The source said: “Although it was not officially part of the agenda, the leadership of the party tasked chieftains on the need to remain in the PDP and shun all plots to decamp.

“And in various private discussions, the issue came up severally, giving indications that the party is really concerned over the reports.

“There is no way we will succeed in re-branding and repositioning the party ahead of 2019 general elections, as was planned at the confab if at the end of the day, it turned out to be true that two of our remaining Governors have been plotting to ditch the party”.