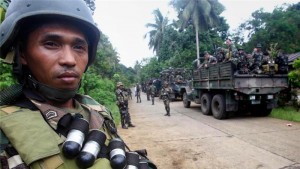 Philippine marines killed eight suspected sympathisers of the Islamic State of Iraq and the Levant (ISIL) in a gun battle in the southern Philippines. The men were killed in a brief firefight at dawn on Thursday near Palimbang town in Sultan Kudarat province, Brigadier General Emmanuel Salamat said. They were mostly Filipinos but one was possibly Indonesian.

“Our forces were moving to arrest them but these lawless elements opened fire,” Salamat told The Associated Press on Friday. “We have received information that they were conducting bomb-making training and that they may take steps to expand their group, so they became a target of a law enforcement operation.”

Recovered documents show the slain fighters belonged to Ansar Al-Khilafah Philippines  a new armed group with about 50 members who pledged allegiance to ISIL leader Abu Bakr al-Baghdadi last year. Marines also found two assault rifles, a pistol, two-way radios, and documents, according to Salamat. It was not immediately clear if the group’s leader, Mohamad Jaafar Maguid – who uses the nom de guerre Abu Ghaib or Commander Tokboy – was among those killed, Salamat said.

Fighters from three small armed organisations in the country’s volatile south, including the Abu Sayyaf, have pledged support for ISIL, but there is no evidence that they have active collaboration with the Middle East-based group, Philippine security officials say.