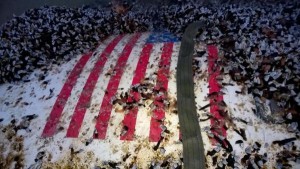 A piece of a rocket, believed to be from the SpaceX Falcon 9 that exploded on takeoff from Florida in June, was found near Britain Friday. UPI reports:

The barnacle-encrusted metal section of the rocket, about 32 feet by 13 feet, was hauled onto a boat whose crew discovered it floating on the ocean’s surface near the Scilly Islands, at the western end of Britain. It was towed to the town of Tresco, where U.K. Coastal Area Commander Martin Leslie determined it was a part of the exploded rocket.

The privately-owned rocket was carrying supplies to the International Space Station from Cape Canaveral, Fla., when it exploded on June 28. Pieces of the rocket fell into the Atlantic Ocean, and one was evidently carried by currents to Britain. A painted American flag and the name “Falcon 9” were prominent on the metal fragment.

Joseph Thomas, aboard the boat, said he initially noticed the rocket section was surrounded by seagulls and thought it was a dead whale. Pete Hicks, also aboard the boat, said on Twitter, “Towed in and beached a piece of flotsam earlier; thoughts were it could be aviation parts…didn’t imagine space race.”