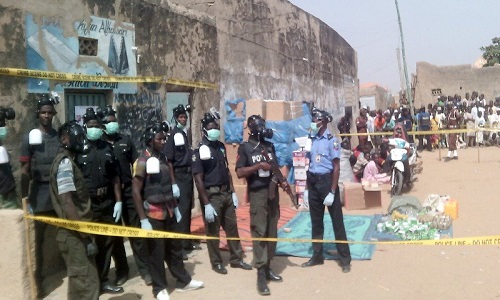 The Kano State Police Command has made “the biggest seizure of hard drugs in recent times”, involving over 23,000 kilograms of Indian hemp valued at N60 million, the state police commissioner, Muhammad Musa Katsina has disclosed.

The police boss said the consignment was stocked in two local shops at Ja’en quarters in the metropolis and that three suspects including the owner of the house, a 70-yr old woman (name withheld), were arrested in connection with the narcotics.

Parading the suspects and the 48 sacks of wrapped cannabis substance at Ja’en quarters on Friday, the CP Katsina said the real baron behind the banned substances was still on the run.

“I can assure you, the real baron will be arrested soon. We have extended our tentacles to various places and we will very soon arrest the man”, he assured.

Mr. Katsina said based on police preliminary findings, the cannabis was transported to Ja’en quarters around 2am when most residents were already fast asleep.