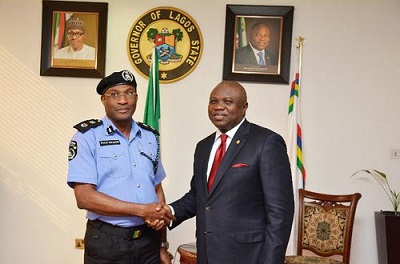 Amid the hue and cry of the residents of Lagos State over the increasing spate of crime, especially gridlock robberies, the Police have increased their patrols on major roads to curb the menace.

It is known that the criminals who rob motorists and commuters in traffic jams are most times people who pretend to be hawkers of assorted wares.

The News Agency of Nigeria (NAN) reports that it is important to note that some causes of traffic robberies are the ripple effects of motorists’ indiscipline, impatience and selfishness.

Investigations by the police have revealed how traffic hawkers turn to robbers at night and connive with commercial motorcycle operators as get-away after forcefully dispossessing their victims of valuables.

The investigations according to the Lagos State Commissioner of Police, Mr Fatai Owoseni, showed that some of the arrested traffic robbers had an organised group.

They have a place where they assemble to get their briefings from their gang leaders before they are distributed to various locations in the state to commit the heinous act, the commissioner disclosed.

The police have also enumerated some of the tactics the robbers employed during their operations to include, tapping at motorists’ side windows and showing them their guns to instill fear in them.

Then they demand that motorists or his passengers hand over their valuables which they make away with.

They latest of their tricks is to disguise as policemen on duty and flag down vehicles and demand for its particulars.

Whether they find anything wrong with the vehicle’s documents or not, they order you to go with them to the police station only to divert their victim to an unknown destination to kidnap him.

Afterwards, they ask the victim to call any of his or relation and they will demand for ransom.

In a move to checkmate these ugly developments and fight crime generally, the police have increased their patrols, especially with the recently introduced “Safer Highways Patrol”.

A Correspondent of NAN reports that the presence of policemen on the highways and even streets, especially in areas prone to gridlocks are visible.

NAN observed that the Operation Safer Highways Patrol teams have coordinated their patrols in a way that the traffic won’t prevent the officials from doing their job.

They are now seen on motorcycles monitoring traffic on some dual carriage ways like the Lagos/Abeokuta expressway, usually between Oja-Oba and Ile-epo area of Abule-Egba, where the traffic is intense.

While the patrol vehicle with its team keep parading the side of the road where traffic is moving, some policemen are seen walking through the side where there is traffic jam.

At Ikeja Under-Bridge close to the ConOil filling station, some policemen are stationed there as from 8.30 p.m. to monitor the traffic.

Others go on random patrol on motorcycles to the bridge close to the Computer Village.

Also along Abattoir, Oko-Oba/Agege axis, the Operation Safer Highways patrol team are stationed at the other side of the road, while policemen monitor the traffic for hoodlums trying to cash in on the situation.

They also enforce discipline by arresting vehicles driving against traffic.

NAN recalls that the Owoseni had on Thursday assured residents of the state of police continuous effort to improve on the strategies emplaced in crime and traffic management.

Owoseni said that as a result of police swift response to distress calls, 21 suspects were arrested between September and October in connection with armed robbery cases.

Out of the number, he said that 13 were specifically in connection with traffic robberies.

He added that the various items stolen from the victims were recovered and returned to the victims as some of the hoodlums were caught in the act due to the intelligence and surveillance by policemen.

The commissioner also said that some other measures had been put in place to curb traffic robbery and with more overwhelming presence of the police on the streets.

“The command is working towards dislodging the assembly of the hoodlums and other criminals in the state”, Owoseni said.

He condemned the indiscipline of some motorists who got carried away while pressing their phone which had a ripple effect on traffic build up.

He urged Nigerians to shun reporting crime first on the social media, advising that the right thing to do was to report first to the nearest police station.

The commissioner noted that doing so would help the police in preventing further occurrence. (NAN)