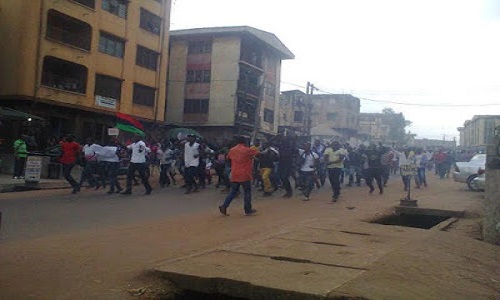 The Police in Delta on Friday used teargas to disperse dozens of pro-Biafra agitators who staged a protest in Asaba.

The protesters said they were in solidarity with the Indigenous People of Biafra.

Some members of the group were arrested for blocking the Asaba-Benin expressway.

They chanted songs calling for the unconditional release of Nnamdi Kanu, the leader of the Biafran group.

However, a police source said the arrested members were later released following “an order from above”.

Members of the group had poured into the Asaba-Benin expressway, blocking a large portion of the ever-busy road, from Summit Junction to Coker Junction axis in Asaba.

The group held up vehicular movement on the road for hours, forcing many transporters to make a U-turn, diverting into Asaba main town, thereby causing a major gridlock.

However, police patrol teams from the Delta Police Command confronted the protesters, using tear gas to disperse them.

One of the protesters, Uche Obiakor, said the police intervention in the rally was injustice to the group, saying that members of IPOB were on a peaceful rally.

“What the police did today is a great injustice to the Biafra people because we are not armed neither did we attack anybody.

“We are just on a peaceful protest for the unconditional release of our leader, Nnamdi Kanu.

“We want Nnamdi Kanu to be set free, and all charges against him dropped unconditionally”, he said.

The spokesperson of the state Police Command, Charles Muka, confirmed the incident.

He, however, declined to comment on the arrest and subsequent release of the IPOB members.

“What I can tell you is that the police are on top of the situation. We are on it; that is all I can say for now”, Mr. Muka said.