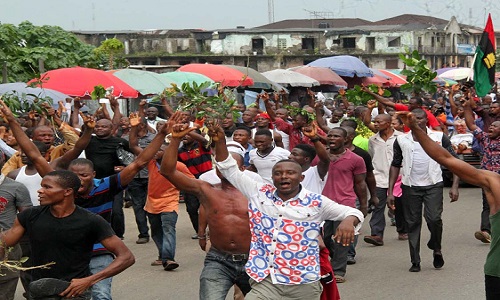 The Nigeria Police Force on Friday warned the Indigenous People of Biafra (IPOB) against carrying out its planned protest across states in the Southeast over concerns dangerous weapons may be used.

In a statement in Abuja, the Force Public Relations Officer, Olabisi Kolawole, termed the protest “ill-advised”.

Kolawole, Acting Assistant Commissioner of Police, said the Police “remind the brains behind this security threat that the law prohibiting the unlawful possession of firearms is still in-force”.

She added that “any attempt to unleash mayhem on innocent and law abiding Nigerians under any guise by this group will be met with stiff resistance from the Police and other security agencies, the actors will be brought to justice in line with extant criminal laws.

“Citizens in the Southeastern States are hereby assured of adequate protection, as appropriate Police deployment has been emplaced to deal decisively with any group or persons who might be bent on breaching public peace and threatening national security”.