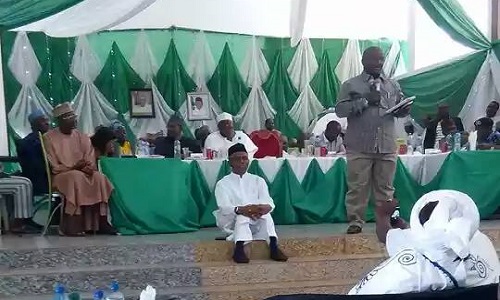 Governor Nasir El-Rufai of Kaduna State at the weekend held a Town Hall meeting with stakeholders to deliberate on the proposed 2016 budget, just as he disclosed that political appointees in his administration would take a pay cut for change.

The proposed budget is about N166 billion with capital expenditure taking the larger chunk of N104 billion while recurrent takes N62 billion.

He further said political appointees would take pay cuts as sacrifice for change while there would be no automatic annual salary increments in 2016 and duty tour allowances and estacode rates would be reduced.

“We have called this meeting today to present to you the broad principles informing the policy choices that are reflected in the draft 2016 budget. The budget is anchored on the commitments outlined in the Restoration Programme, the manifesto platform on which the Kaduna State APC campaigned”, he said.

“When we formally launched our election campaign, we made it clear that the APC believes in the capacity of our people to make the best choices for themselves if they are properly educated, given decent healthcare and jobs in a secure environment”, he added.

The governor recalled that in the past, annual budgets were approved without being implemented, leaving a legacy of abandoned projects in the state, and assured that he would always put the people first in all his actions.

Towards this end, Gov. El-Rufai said in the proposed 2016 budget, one of the pro-poor programmes included interventions in school feeding, planting of economic trees and waste collection which are expected to create 200,000 jobs.