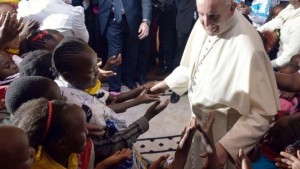 Pope Francis has criticised private developers for grabbing land from poor people, during his visit to Kangemi, a slum area of Kenya’s capital, Nairobi. He referred to an incident earlier this year when police fired tear gas at children protesting against developers trying to take over their playground.

The pontiff later made an impassioned plea against corruption, saying: “Corrupt people don’t live in peace.” To take a stand against tribalism, he got his audience to hold hands. “If you don’t dialogue with each other, then you’re going to have a division like a worm that grows in society,” he told a large crowd of young people who had gathered in Nairobi’s Kasarani stadium to hear him.

“I want to invite you all – that we hold each other’s hands – let’s hold hands together, let’s stand up as a sign against bad tribalism – we are all a nation,” he said.  The BBC’s Caroline Wyatt in Nairobi says Pope Francis was cheered as he arrived at his first stop of the day in Kangemi, which is home to tens of thousands of people living in cramped rooms, usually without running water and basic sanitation.

He criticised wealthy minorities, indifferent to the plight of the poor and called for improved living conditions and infrastructure in urban areas – including drinking water and schools. The Pope said it was a duty for all to ensure that the poor in urban areas had the “three Ls” – access to land, lodging and labour. “I am also aware of the serious problem posed by faceless ‘private developers’ who hoard areas of land and even attempt to appropriate the playgrounds of your children’s schools,” he said.