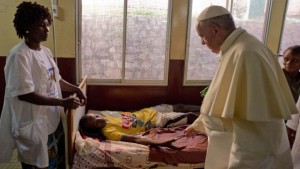 Pope Francis is visiting a mosque in the capital of the Central African Republic, in what is being seen as the most difficult part of his Africa tour. The Pope is meeting Muslims who have sought shelter in Bangui after nearly three years of violence between Christians and Muslims. Most Muslims have left the capital but 15,000 are left in an area called PK5 surrounded by armed Christian militia.

Pope Francis will conclude his visit to Africa with a final Mass in Bangui. On Sunday, the Pope called on fighting factions in the CAR to lay down their weapons. Celebrating Mass in Bangui, he said they should instead arm themselves “with justice, love, mercy and authentic peace”.

Earlier, he said he hoped next month’s election in the CAR would open a “new chapter” for the country. The CAR has been torn apart by violence between Muslim rebels and Christian militias. It is the pontiff’s first visit to a conflict zone and the final stop on his landmark three-nation African tour.