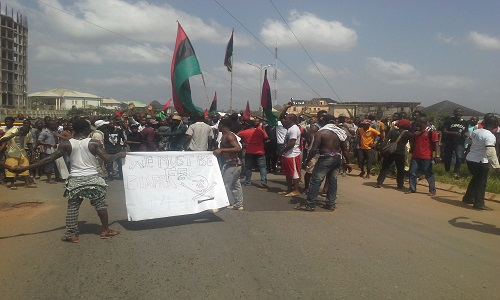 The wave of protests by Members of the Indigenous People of Biafra (IPOB) and a faction of the Movement for the Actualisation of Sovereign State of Biafra (MASSOB), as well as other pro-Brafra groups, has finally reached Owerri, the Imo State capital with economic activities and vehicular movements grounded on Friday.

The protesters took to the streets to condemn the continued detention of the Radio Biafra Director, Nnamdi Kanu by the Federal Government.

The protests took place despite increased security measures put in place by the Imo State Governor, Rochas Okorocha, who not only condemned the agitation for Biafra, he called on the people of the state not to join any form of protests by the separatists.

Defying the security measures, IPOB members, as early as 6am Friday, reportedly trekked from Aba in neighbouring Abia State and Port Harcourt, Rivers State, to converge at strategic positions in the state capital from where they linked up with their members on ground to begin the protest.

Although there was heavy security presence, including battle ready soldiers and heavily armed mobile Policemen, who drove behind the protesters in their vehicles, the tension was palpable especially among the residents as shop owners hurriedly locked up their shops, while motorists too stayed off the roads to make way for the long procession.

Meanwhile, it was learnt that the protesters in their thousands, marched through major streets in the state capital, displaying the Biafra flag and placards with various inscriptions such as, ‘FG free Nnamdi Kanu now’, ‘Kanu is Biafra and we are Kanu’, ‘we need Biafra now’ , among others and chanting war songs.

The factional MASSOB Director of Information, Uchenna Madu, said that they were in solidarity with IPOB because Kanu is a true Biafran.

He said that “the protest will continue as a platform to send the message across that we need Biafra, we are not secured in Nigeria, and we are feeling that our future is secured not in Nigeria. Our demonstrations shall remain non-violent, today we are in Owerri and by the time we finish in the Southeast and Kanu is not released we will march to Abuja so that we can all be detained because we are ready to die for what believe in”.

According to Madu, “we are tired of being slaves in Nigeria, what is happening now shows that Biafra is ready to go so let them give us Biafra and release our leader immediately”.

At the Imo Government House, there was equally heavy security presence apparently to forestall any attempt by the protesters to invade the Governor’s official residence.