Facts have now emerged on the reason behind the secret meeting held at Aso Rock Villa between former president Goodluck Jonathan and his successor, President Muhammadu Buhari. 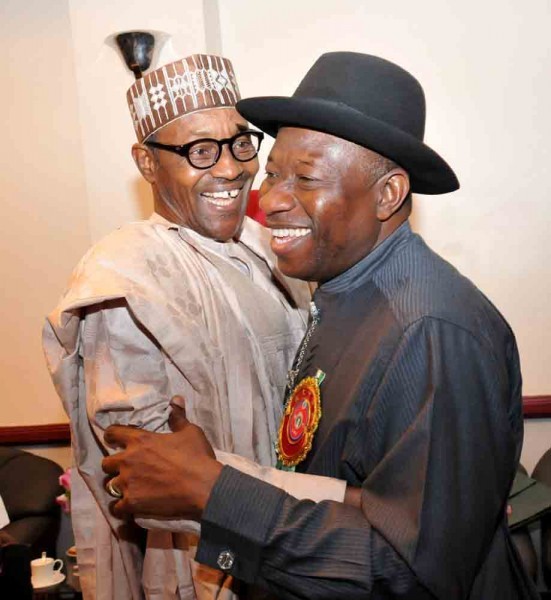 It was learnt that the meeting was facilitated by former head of state Gen. Abdulsalami Abubakar, The Nation reports.

Abubakar headed the 2015 elections peace committee that paved way for peace before, during and after the 2015 general elections.

The meeting was coming on the heels of complaints by Jonathan that Buhari is not sticking to the peace accord they signed prior to March 28, 2015 presidential election.

Jonathan had hoped to stop the probe of his administration over alleged misappropriation of fund under his watch.

However, the president had insisted that all looted funds must be returned. A source who does not want to be named due to the sensitivity of the issue said the president told Jonathan that he had nothing to fear at all.

It was gathered that the outcome of the session between Buhari and Jonathan could have informed Vice President Yemi Osinbajo’s statement at the weekend. The VP said the anti-corruption fight of the present administration is not focused on Jonathan.

It is believed in some quarters that Jonathan was not happy that Buhari had moved against his ex-national security adviser, ex-chief security officer and some ministers.

The source said Jonathan prevailed on Abubakar’s committee to beg Buhari not to‘rubbish’ his administration.

He said: “For some weeks, Jonathan has been in the country to iron out some issues on his government. Based on Jonathan’s complaint, Abdulsalami made efforts – five times- to get in touch with Buhari but the ex-Head of State could not get through on time. I think Buhari already had security reports on Jonathan’s emissary.”

At some point, the former head of state met brick wall in securing audience with president Buhari but some past presidents had to prevail on Buhari to give the committee a chance to mediate.

The source added: “This was how Abdulsalami succeeded in securing an appointment from Buhari for Jonathan with a caveat that the immediate past President should feel free to bare his mind.

“Jonathan said he was hearing some of the allegations, especially financial sleaze, against his administration for the first time. He made it clear that he had nothing to do with some of these corrupt practices.

“He said whatever steps or actions the President intends to take; it should be within the framework of the peace accord the two leaders signed. Obviously, he wanted soft landing. He also pledged to cooperate with Buhari as much as possible on all steps he is going to take.”

Buhari had stated during the meeting that Jonathan had nothing to fear but insisted that there was no going back on the recovery of looted funds.

“The President reassured Jonathan that he has no personal agenda against him. But he insisted that whatever was stolen from the treasury must be returned,” the source said.